I’m not a vegan, and I honestly can’t see myself transitioning to a full vegan or vegetarian diet. But Meatless Mondays and plant-based dishes are occurring more and more frequently in my household – show me a meat alternative and my interest is piqued!

This last month has had me researching hours at a time on egg alternatives, and the list is longer than you would think! The egg has been part of both western and eastern diets for centuries, but as the vegetarian/vegan trend or lifestyle is on the rise the need for alternatives to animal-based food products grows. In addition, apart from a lifestyle choice, alternatives for eggs also play a role in religion influenced diets and allergies. An egg allergy (although most prevalent in children and they tend to grow
out of it) or intolerance can leave you feeling mildly uncomfortable or induce anaphylaxis.
On my search for egg alternatives, I stumbled across a product that immediately had me wracking my brain for answers and recipes. This product is called Aquafaba – Aqua meaning water, and Faba meaning bean – yes, water from beans. This bean water is normally washed down the drain every time we open a can of chickpeas.

It is the waste or residual water that is left behind after chickpeas have been cooked or canned. The functional use of chickpea water began in 2014, in the kitchen of Joël Roessel, who documented his use of liquid from various canned beans to make meringues on his blog. Months later, a software engineer named Goose Wohlt had to make vegan meringues for Passover. After he whipped up some aquafaba, he posted about it on a Facebook group for vegans ( What Fat Vegans Eat ), and the rest was history. The age of Aquafaba, a vegan-friendly egg-alternative was born. Since then it has taken the vegetarian/vegan community by storm and been used in various applications such as mousses, meringues, cakes, bread and even omelettes.

But what makes this possible?

How is it, what is deemed as a waste product, used so successfully as a substitute for egg white? The functional properties of aquafaba, which include foaming, gelling and emulsifying to name a few, lie within its composition – which has a lot to do with the varying concentrations of proteins, starches and saponins that leach out into the water upon cooking.
Proteins are large macromolecules that are made up of chains of various amino acids linked by peptide bonds. They are used in food applications for far more than just nutrition purposes, they have the following physicochemical attributes/functional properties that can influence their usefulness in foods, based on how the proteins interact with each other, other proteins or the surface of air/water bubbles.
In a study done on aquafaba as an egg white substitute in foams and emulsions in 2019 in Denmark, they found that the protein concentration of aquafaba ranged between 13-14g/L of liquid (1.3-1.4%). This is not nearly as high as what you would find in egg whites or directly in the chickpea itself, but it’s enough to
impart function to the water, which as we know does not have its own ability to create a stable foam, emulsify or gel.

So as you guessed it, the main functional property of proteins that we’re going to look at is that of foaming as well as the use of aquafaba in foam-based dessert applications. In the previous post on Dalgona coffee, an important aspect in stabilising and maintaining was the presence of a surfactant. The proteins that are found in the chickpea water act as the surfactant which enables the formation and stabilisation of the gas (air) phase – when the aquafaba is rapidly, mechanically whipped, a lot of air is incorporated into the liquid. How this generally works is that the proteins rearrange themselves during the whipping process and form an interface between the air bubbles and the liquid. Through the mechanical action of whipping the proteins unfold (are denatured) from their coiled formation, exposing their water-loving (hydrophilic) and water-hating (hydrophobic) parts. This then enables them to align at the interface of the air and water, with the hydrophilic amino acids facing the liquid phase, and the hydrophobic amino acids coat the air bubbles. This reduces the interfacial tension, stabilising the foam.

In order for a protein to act as a good foaming agent/surfactant, it needs to exhibit good foamability as well as stability, these can be broken down as follows:

This is what makes aquafaba such a great substitute for egg whites as it exhibits all of these properties due to the protein content of the water itself. It definitely does not display the exact same stability and foamability of egg white, but it’s a pretty decent alternative.

But what’s all the theory without a bit of practice?

I like to play in the kitchen, so I spent a good few hours putting my confectioner’s skills to practice by utilising the aquafaba in two very popular foam-based dishes; chocolate mousse and meringues! Both of these desserts are first and foremost types of foams that initially began with the rapid incorporation (whipping) of air into the base. Usually done with egg whites, however, I obviously used aquafaba as the base of these desserts. The end results were amazing.
But I want to break it down a bit – 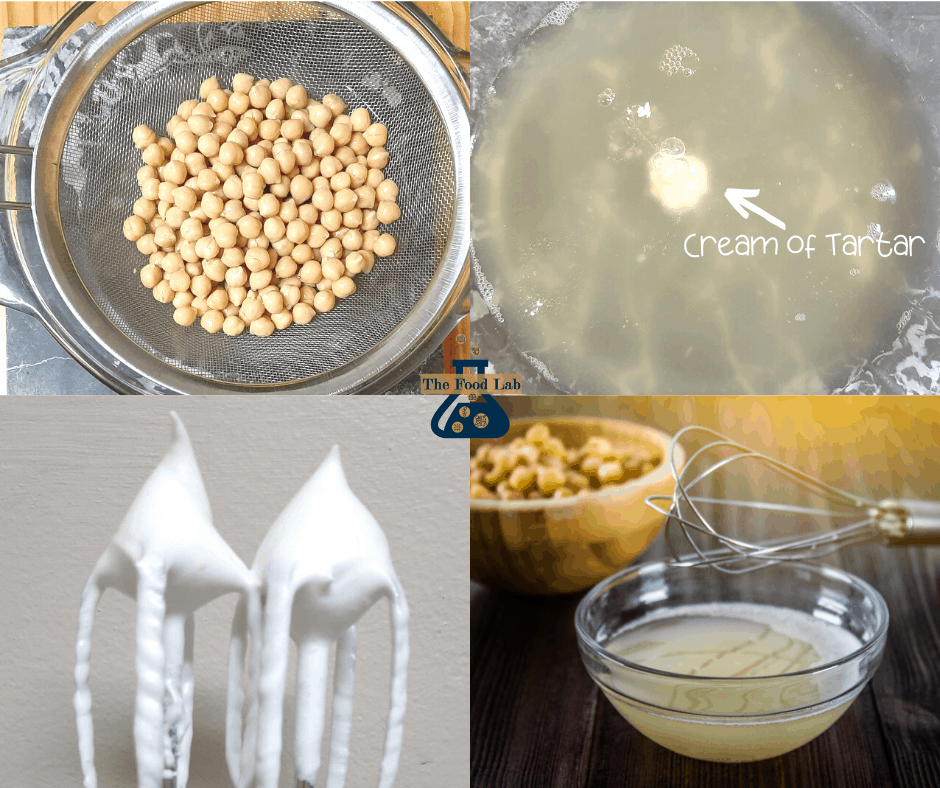 The aquafaba and cream of tartar were whipped at medium speed for five minutes and then on high for another three minutes until stiff large peaks were formed. The cream of tartar helps to strengthen and stabilise the meringue by lowering the pH of the liquid. Once the aquafaba has been whipped to a stiff peak, and the chocolate has been melted (with the almond milk) and cooled (to the touch), it is combined by lightly folding in the chocolate. Once folded in it can be spooned into a glass or ramekin, and then refrigerated until set (about an hour).
The emulsifiers, cocoa butter and sugars in the chocolate help strengthen and stabilise the mousse by increasing the viscosity of the liquid phase as well as solidifying at refrigerated temperatures.

Remember to preheat your oven to 120°C 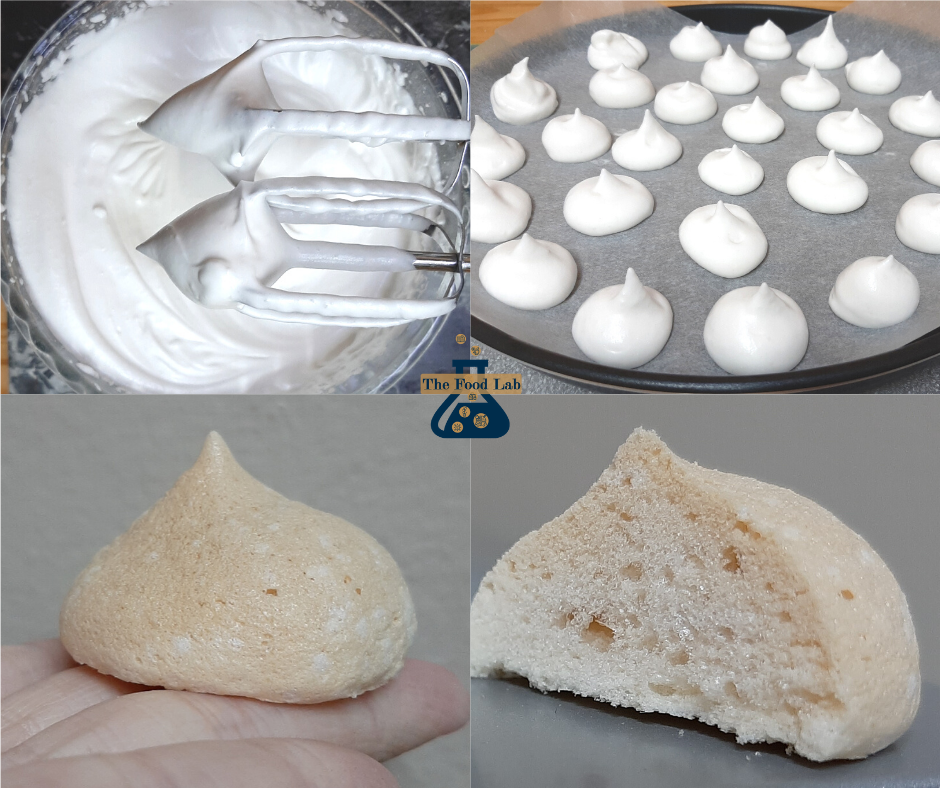 The aquafaba and cream of tartar were whipped at medium speed for five minutes until soft peaks were reached. The castor sugar was added one tablespoon at a time until all of it was incorporated. The sugar is used to not only sweeten the meringue but also act as a stabiliser. It does this by increasing the viscosity of the liquid phase of the meringue mixture and also by binding water to ensure the integrity of the meringue is kept during baking as a lot of water gets evaporated.
Bake at 120°C for 45 minutes, do not open the door when done. Leave them in the oven to dry and cool for at least another 45-60 minutes.

I made about sixty meringues with half a cup of aquafaba! So this just shows that aquafaba has quite an amazing foaming capacity.

So there you go! The science behind why and how aquafaba works so well as an egg replacer, especially as it creates such a stable foam.

If you have any questions or want to know more about the different applications of aquafaba, leave a comment below or pop us an email.
Who knows, we might do a feature article based on your question!