So far, 2020 has been quite a roller-coaster ride. With most of us in some sort of lockdown situation, it has given many of us the ability to explore the more creative and experimental side of ourselves.

Being in lockdown comes with its challenges, but more specifically the ones that go viral on social media. The last three weeks of lockdown in South Africa include the Banana Bread Challenge, where honestly, were you even in lockdown if you didn’t make banana bread?

The challenges ranged from delicious bakes and treats to the weird kind, such as taking shots of alcohol and salt in conjunction with a raw egg – now I don’t know about you, but I don’t see any reason in purposely trying to land myself in a doctor’s waiting room complaining of an upset stomach during a pandemic.

However, of all the challenges that have been making the rounds on social media, the one that tempted me most was the Dalgona Coffee or Whipped Coffee challenge – my inner foodie and food scientist was screaming.

The Brief Origin of the Dalgona Coffee

Since the start of the trend in late March this year, it was said that this coffee originated in South Korea.  However, ask any South Korean for some 달고나 (dal-goh-nah) and they’ll point you in the direction of a spongy sweet treat usually found amongst the various street food vendors in South Korea. Dalgona is very similar to what we know as Honeycomb (the crunchy candy made with sugar, honey and bicarbonate of soda), just omit the honey and you’ve got yourself a very decadent, typical South Korean treat.

So, how did this coffee acquire its misnomer?

Actor, Jung Il-Woo, had coined the term Dalgona Coffee after a visit to the Island of Macau he went on the TV show Stars’ Top Recipe at Fun-Staurant and spoke of a whipped coffee drink he had, and that it reminded him of dalgona, a common street food in Korea. Not soon after people began posting videos of themselves attempting to make the whipped coffee on TikTok and Instagram – so there you have it, a viral coffee making challenge was born.

The Real Origin of Beaten Coffee

Beaten Coffee is a home-style coffee originally from India. It has various names such as Whipped Coffee, Beaten Coffee, Desi Cappuccino or Pakistani Latte (Phitti Hui) but it is more commonly known as the Indian Cappuccino. Equal parts warm water, instant coffee and sugar are beaten together to form a paste – the goal is to beat long enough to aerate the mixture and form a luxuriously smooth and creamy foam. Originally it is served in a glass and warm milk is poured over the whip but can be spooned carefully over warm or cold milk.

I think that’s enough of a pop culture/history lesson, right?

Let’s get to the science.

The Science of Beaten Coffee

What you’re essentially doing when you make Beaten or Whipped coffee is creating a foam. This can be loosely defined as the aeration of an aqueous solution (incorporating air into a water-based solution) but more specifically it is the dispersion of gas bubbles in a liquid.
Foams are everywhere, I’m sure you’ve attempted to whip cream, bake bread, or make a meringue? This is the same process, incorporating air into a liquid.

Foams are made in one of two ways;

By beating the mixture vigorously with a whisk, fork or spoon (traditionally) you are expending a lot of mechanical energy and mechanically adding air into the liquid mixture and forming air bubbles.

{I have some advice though, if you are attempting this at home, and don’t want to spend the next twenty to thirty minutes cursing at your biceps (that become more and more useless with each passing minute) use an electric beater. But I guess since a lot of us have no place to rush off to at the moment, spending a few extra minutes whipping up your coffee should at least give you the feeling that you accomplished something with A LOT of patience and elbow grease, and also perhaps your morning workout}

The longer you beat the more air bubbles you will form in the mixture, but it’s not just the amount of air bubbles you form. What is really important is the stability of the liquid, the components of the mixture need to ensure that the air bubbles that are created don’t coalesce (come together) too quickly and completely break down the foam.

The stability of the foam is really important. Not all liquids are able to form foams; beat a bowl of water long enough and you’ll end up very tired and nothing to show for it.

How are Foams Stabilized? 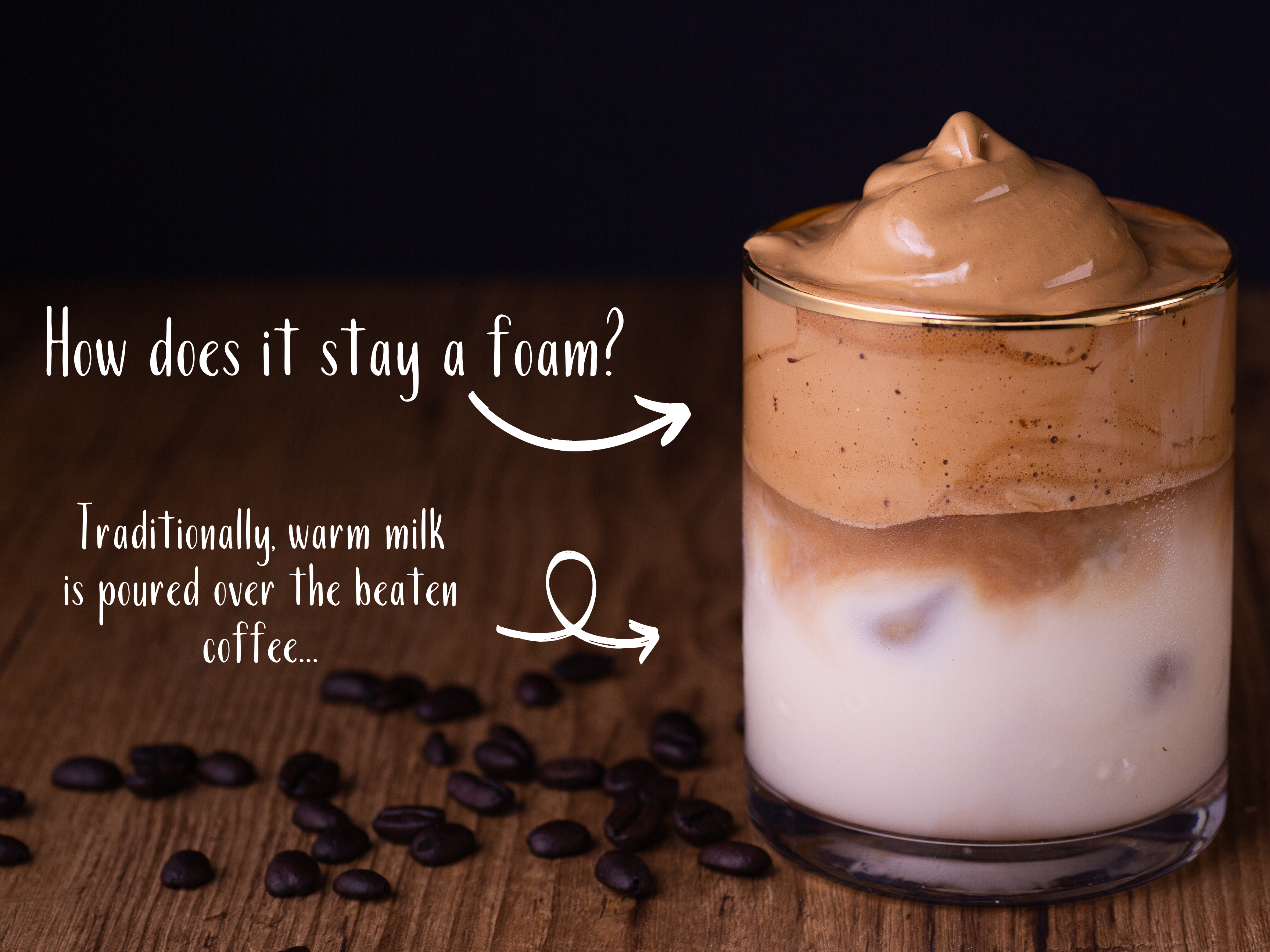 In the Whipped Coffee, the components are sugar, coffee and water. As we know water on its own cannot form a foam, so the coffee and sugar act as the main contributors to the foam formation. A stable foam largely depends on the rigidity of the film between the air bubbles, this is improved by proteins; instant coffee contains a small amount of proteins, lipids and polysaccharides which can contribute to the stability. Although the surfactants within the coffee may help, without sugar the foam will collapse rather quickly.

Another stabilizing dependent is the viscosity (thickness) of the liquid phase. I’m sugar conscious and don’t enjoy things that are overly sweet, but in this case, the sugar has a rather important functional purpose, instead of just increasing the sweetness. The largest contributor to the foam formation is the sugar. The sugar acts as the main stabilizer of the coffee foam. This is because the sugar increases the viscosity of the liquid phase, this has a two-fold function;

*due to gravity the liquid between the air bubbles will run down along the lamellae of the bubbles and decrease the liquid space between the bubbles, to form a channel of liquid under the foam (or join the liquid under the foam, in this case, the milk that the whip is spooned over) this then increases the rate of coalescence. The sugar allows for this network of bubbles to be formed, creating the foam, which also allows for the volume of the mixture to increase. The more air you can incorporate into the mixture, the larger the volume of coffee whip you will have.

However, whipped coffee cannot be made without each of the components. If you whip sugar and water, you’ll get a slightly viscous sugar syrup.

There are a few other happenings that take place in a foam that can be discussed a lot further, but I’ll save that for another day!

So, what are you waiting for? Here is the recipe below: 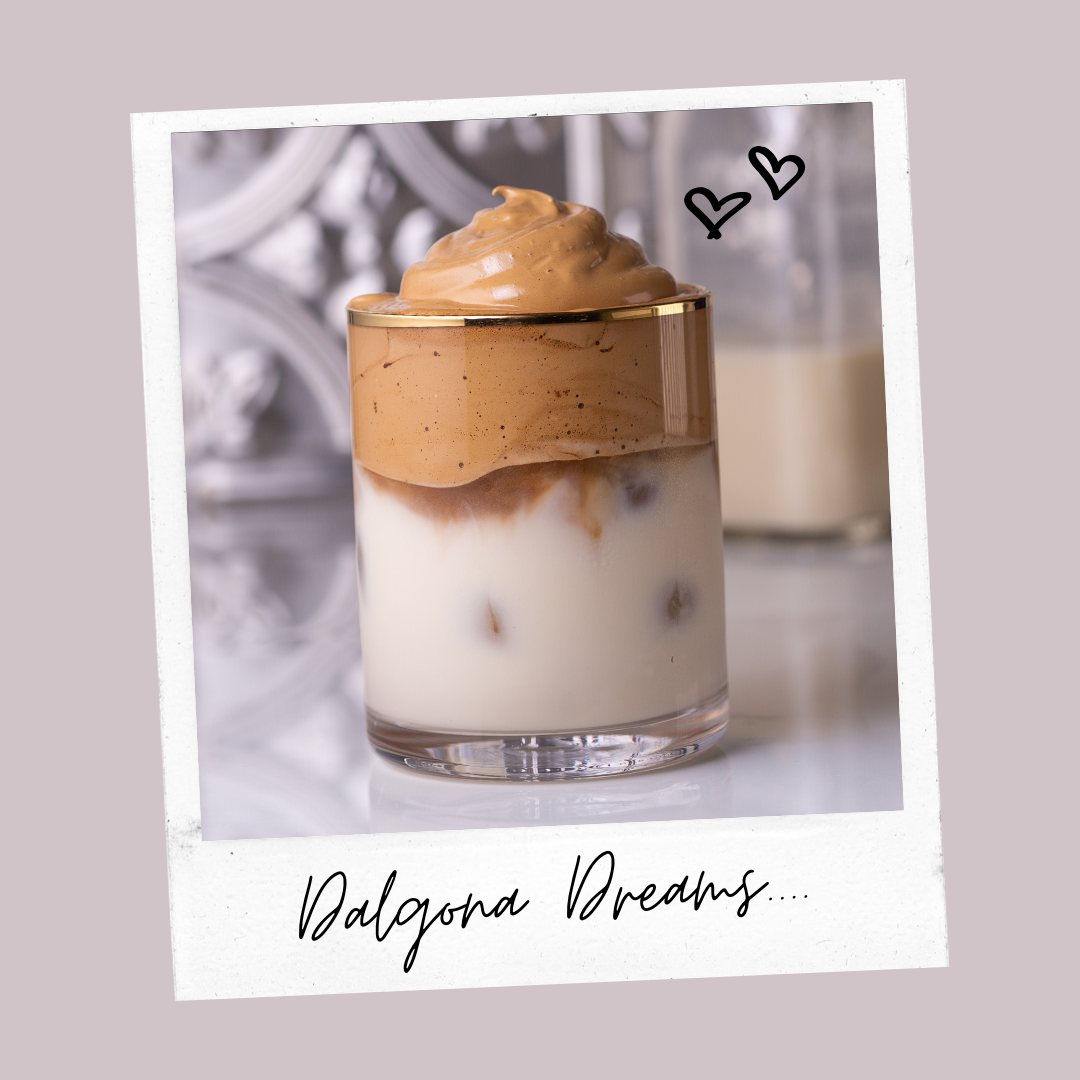