The Dirt on Clean Labels

One of the things you’re taught in science class is how to construct a hypothesis – a supposition or proposed explanation made on the basis of limited evidence as a starting point for further investigation. It’s where we begin inquisition into the phenomena we witness in our environments. If you have ever had to submit a scientific report of any kind you will know that the biggest emphasis is placed on the validity and reputability of the source on which your conclusions are based.  After all I think we can agree that especially in these times with “fake news” and social media being such a large part of our lives – the source matters. So why is it that we are so quick to accept Netflix documentaries and ‘fitfluencers’ on ‘the Gram’ as reputable sources for food facts? Even as a person who is educated in the disciplines of food science and nutrition I can freely admit that I am also a sucker for a good pitch, packaging or story behind a product. Give me some health claims and trendy biodegradable packaging appealing to my millennial need for ‘the next best thing’ and you’ve got my attention. Amidst all this I really don’t blame the average consumer for thinking bulletproof coffee is a viable weight loss tool.

The myths surrounding food are ubiquitous. Some of the oldest such as the myth that searing meat seals in the moisture (which has been disproven multiple times) from a study done by Justus von Liebig, a German chemist and food scientist, from around 1850 is still prevalent today. As humans (and specifically ones in the media and marketing industries) we tend to latch onto certain half-truths and make them the selling point for a product or reasoning behind our choices in life. This is so often seen in the food space where we see products established on the whims of a study, lifted from its context and used as the basis for trends such as using coconut sugar instead of cane sugar because it is “nutritionally superior” to cane sugar when the real significant difference lies in the price and it’s Pinterest rep. So this all presses the question of exactly how one is supposed to separate a trendy food movement based on thin scientific evidence from a good honest food product?

There are several logical questions I pose to my millennial consumer brain when I think about purchasing one of these packages of consumable promises which save me (and my bank balance) from me.

1. How clean is that label really?

Have you ever wondered what it is about Cheese Curls or Nik Naks that makes them so addictively satisfying? The way they are so comfortingly moreish makes you think their secret ingredient must come from the same factory as the Big Mac sauce and KFC’s chicken coating. There is a simple reason for this – processed food producers struck gold when they realised they could get their consumers addicted to their products by making them hyperpalatable. They found the perfect combinations of saturated fats, salt, sugar and carbohydrates to produce addictively delicious foods. Which reflects on their nutritional labels as high sodium, high saturated fat and sugar products with ingredient lists longer than your shopping list and that often seem to be in another language littered with E-numbers. Clean label was born when scientists realised that these hyperpalatable packages of processed comfort were the leading culprit for the rising obesity epidemic. Owed to processed food manufacturers selling delicious convenience often chosen over prepared whole foods at home. This has pushed food manufacturers to “clean up their labels” by making ingredient listings shorter and easier for the consumer to understand by eliminating E-numbers and using ingredients typically found in a household kitchen. However this hasn’t stopped manufacturers from making their hyperpalatable foods seem clean label and charging more for them while they’re at it. Organic cane sugar, coconut sugar, rice malt syrup, maple syrup,  and raw honey are just a few of the new ways producers are adding sugars to foods making the public believe their products are less “processed”. While one can argue that these “natural” forms of simple sugars hold more nutritional value and therefore less empty calories – in most cases the difference is marginal, and sugars are still sugars the same way pink Himalayan rock salt still contains sodium.

2. What does the macro mix look like compared to other products?

I will never forget the day that I realised the composition of a common “energy bar” that I perceived as a somewhat healthy treat had a marginally better macronutrient composition than the chocolate bar next to it. It blew my mind to think I had only compared the ingredients lists and not the macros as well. Macronutrients are the carbohydrates, fats and proteins in our foods – the amounts of these are usually represented in a nutritional data table on most food packages. The infographic below is quite good explanation on how to read these. 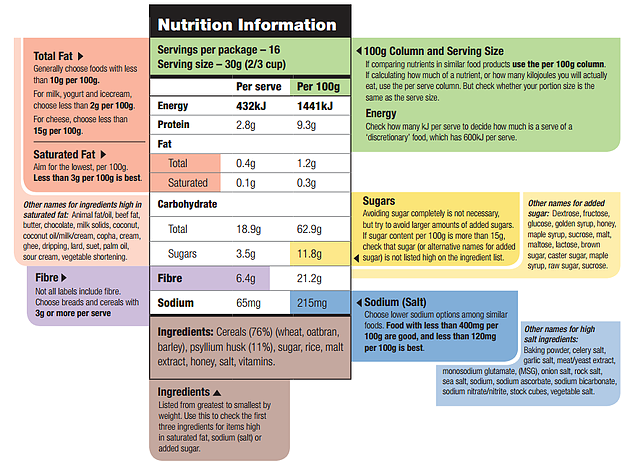 3. What do the claims on the label really say?

Sometimes these new agey products have whole list of promises and claims on them selling you a lifestyle and then some. However, a lot of these are just that – selling points linked to thin evidence and removed from context – so it’s good to be aware and do your research to understand what those claims mean and how they relate to your diet.

Here are some of these claims and what they mean:

The truth is, if you have ever tried to accomplish anything worthwhile you will know that there is seldom a magic pill or easy way to success. The same is true for our diets and the food products we eat. Life and the food we eat are meant to be enjoyed. Obsessing over the next best thing and trying to keep up with the ‘new Kale’ is just not worth it. So everything in moderation and don’t be fooled by good marketing…all the time!